Make every cup of morning caffeine extra special with a personalized coffee mug. Come in 2 sizes 11 oz and 15 oz, PersonalFury mugs are personalized-able with our advanced selection of dogs, cats, states, characters, backgrounds, quotes, etc. A custom mug makes such a wonderful gift for your loved ones, whether it is your mother, father, sister, brother, bestie, husband, wife and children. Enjoy creating the best mug for every special gifting occasion

PREVIEW: Choose your Dog Breeds and Names to see preview ❤️ Please double check your options and spelling before purchasing.

The ETA is applied for US orders only.


International orders: It may take additional days if orders have to go through customs.

Printed and Shipped from California with ❤️. Learn more Returns and Refunds here. 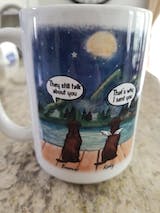 My sister's bday is in April. She had given me a "sisters" mug for my bday in February. Shortly after, she had to put down her last cat who had been with her for 18 years. I came across the ad and thought it would be perfect for my sister. She's had a lot of pets but maxed option is only for 5. So I called my nephew so we could decide which 5. She has 4 pets left in the house but since it's a dog/cat product, the living dog made the cut leaving out the lizard, the turtle and the guinea pig. So, four stars because I wish there was a "list of names" option or something like that for all other types of pets past and present. For instance, on the opposite side you can put: Whether you can see us or not, we're with you too, Mom. Love, Lizard, Turtles, Guinea, FurAngel1, FA2, etc. Nowadays, people tend to have more than 2 pets at a time in their household. So, that's more pets in your lifetime that you lose more often. I just think it would've meant much more to her to see all her other babies' names. ALSO, people, like my sis, tend to have mixed breeds who were rescued or adopted. Think there may be a way to search? Like entering for big/small, fat/thin, spots/stripes, and then the colors. We searched thru all the breeds to see who matched more. We weren't constantly looking so it took a couple of days to get 2 dogs (adopted) and 3 cats (rescued) to what they somewhat looked like. I was giving it to her with one passing that was still new so I didn't want to just get their looks to "close enough". They had to be near perfect. So I had to pick them and send them to my active duty nephew to give the OK. I hounded him so that I could get that to her because she needed it now. So, that's my suggestion. So next time it'll be easier. Just a suggestion for someday she'll need another one for her remaining babies. Or, unfortunately, for me someday in the, FAR future, when I lose my mixed Yorkie/Jack Russell baby. It'd be nice if you find a way to make it easier to match the perfect mutts that we love!
BUT, NONETHELESS, IT WAS VERY WELL MADE! It came exactly as the customization was pictured. Gave it to my sister early with a big, long, teary hug. I just wanted her to be reminded every time she used it that they're right there with her. I am truly and definitely satisfied with my order!

A
Amanda B.
Tearjerker

This was the perfect gift.

Received order approximately 7-10 days before Christmas, wife was thrilled with the mug and its design/message